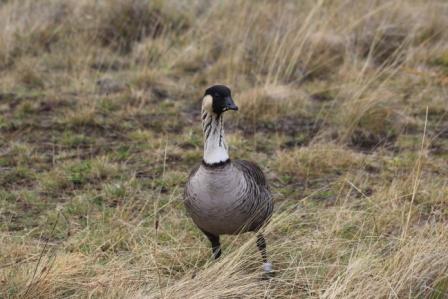 In February of 2017, the Maui News released a story on how Maui’s Wind Farms are seeking an increase in their permitted number of Hoary Bat and Nene fatalities. At the time of the story’s release Kaheawa Wind Power II had already exceeded their bat “takes” and Hawaii’s five major wind farms combined had already killed 146 out of the allowed 180 endemic bats…only five years into their 20 year permits. Nene fatalities at just the Kaheawa Wind Power I (on the high slopes above Maalaea Harbor on Maui) reached 41 since 2006.

Maui News released almost the same article on November 30, 2017, almost nine months later, most likely because the public comment period on the wind farm’s proposal ends December 7. *See bottom of page where you can send your own comments about this proposed increase*

Not much is known about the Hoary Bat, or ‘ope’ape’a, aside from the fact that it is Hawaii’s only native land mammal. It was listed as federally endangered in October 1970 and still, no one really understands the population dynamics of this species. It has been spotted on Maui, but the population here could be 50 or it could be 500; scientists have not conducted population surveys. This lack of knowledge on population counts makes it incredibly difficult to approve increasing the permitted fatalities.

Group Coordinator of the Sierra Club, Adriane Raff-Corwin said, “Because we do not know the size of the population, there is no way of telling what percentage of the population on Maui is being killed by way of an additional 51 bats over the next 15 years and whether this will have significant impact on the population in Maui and Hawaii.”

The state of Hawaii has already been dubbed “the extinction capital of the world” so this topic is incredibly relevant. -A place that makes up only .2% of all US lands but contains 25% of the nation’s federally endangered species? Yes, this is the place that needs to come alive when these discussions begin.

Terraform, the energy giant who owns the Maui Windfarm released a statement saying, “The proposed rates of take are expected to be minor relative to the total population of these species on Maui.”
-If scientists have not established “total population” it seems impossible to be able to gauge whether increased fatalities will be minor.

The Hawaiian Goose, or the Nene also suffers fatalities from the Wind Farms and this bird was listed as endangered in 1967. Kaheawa Wind Power I on Maui is permitted 30 incidental Nene deaths between 2012 and 2032 and as of October 1, 2017, they had already killed 11. The avian mortality “surveys” entail Wind Farm employees searching the ground around the turbines once or twice a week.

As humanity tries to find alternatives to fossil fuel dependence, wind power becomes quite appealing, especially in a place where pretty much on a daily basis you can feel the tradewinds pick up as the sun warms the land. As these giant turbines are mistaken for roosting sites and pose collision issues to our endangered bats and birds, that might be something to consider even more…the sun.

Please send all comments on the proposed increase to glenn.m.metzler@hawaii.gov
Feedback will be sent to the Endangered Species Recovery Committee and the State Board of Land and Natural Resources, who will make the final decision on whether to allow an increase in the number of incidental deaths