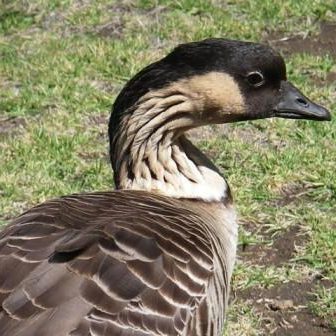 December 2016 Birding on Maui is always fun, especially when you head upcountry into Haleakala National Park. The temperature is cooler, it’s a completely different landscape and you have the chance of seeing the endemic Hawaiian Goose, or Nene (nay-nay).

It is currently the nesting season for this geographically isolated goose. It faced extinction in the 1950’s but the population is increasing. Thanks to conservation efforts, from 1960-1997, Hawaii and Maui released about 2,325 captive-reared geese. Nest predation, poor nutrition and human disturbance still contribute to keeping the Nene the sixth most endangered waterfowl species worldwide. Further management, like restoring native ecosystems, educating the public not to feed the geese and removing mongoose and ungulates from their habitat could help sustain these populations.

Joy Tamayose, a Nene specialist from the endangered species division at Haleakala National Park, recently “talked story” with the public at the Malama Wao Akua native species art exhibit. She mentioned the possibility of downgrading the Nene from endangered to threatened, which is a big topic of discussion. She knows the Nene well and they are not prolific.

They once thrived on all Hawaiian Islands, but are now found primarily on the Big Island, Maui and Kaua’i (with rare sightings on other islands). On Big Island and Hawaii they typically move within mid and high elevation habitats. On Kaua’i, they occupy lowland areas near the coast, where food is plentiful and there are fewer predators.

At the Kaua’i airport, Nene population increased so much they considered them a safety hazard to the commercial airliners. They then relocated some of the birds to Maui. Because they came from a lowland habitat, you can now find these geese at low elevation places like Kanaha Pond in Kahului or random parks in Kihei!

They are beautiful birds with longer legs, more erect posture, and less webbing between their toes than other geese. Their furrowed neck plumage is like no other goose on earth. They mate for life, will participate in cooperative breeding (at times) and are dedicated parents (keeping their goslings with them for at least a year). Decreased habitat, predation, mortality from vehicles, and other issues pose threats to their reproductive success. They are an endangered species.

The Nene could use your help. If you’d like to support Nene conservation, please consider donating to the Hawai’i Endangered Bird Conservation Program. Checks can be mailed to: